In July 2022, retail sales in the UK amounted to £8.5 billion per week, which is slightly more than the figure in June. This statistic includes money spent in stores, supermarkets, petrol stations, and online.

Retail sales volumes increased by 0.3% in July after a 0.2% drop in June 2022. Sales volumes were 2.3% higher than the February 2020 level preceding the coronavirus but decreased compared to last year. 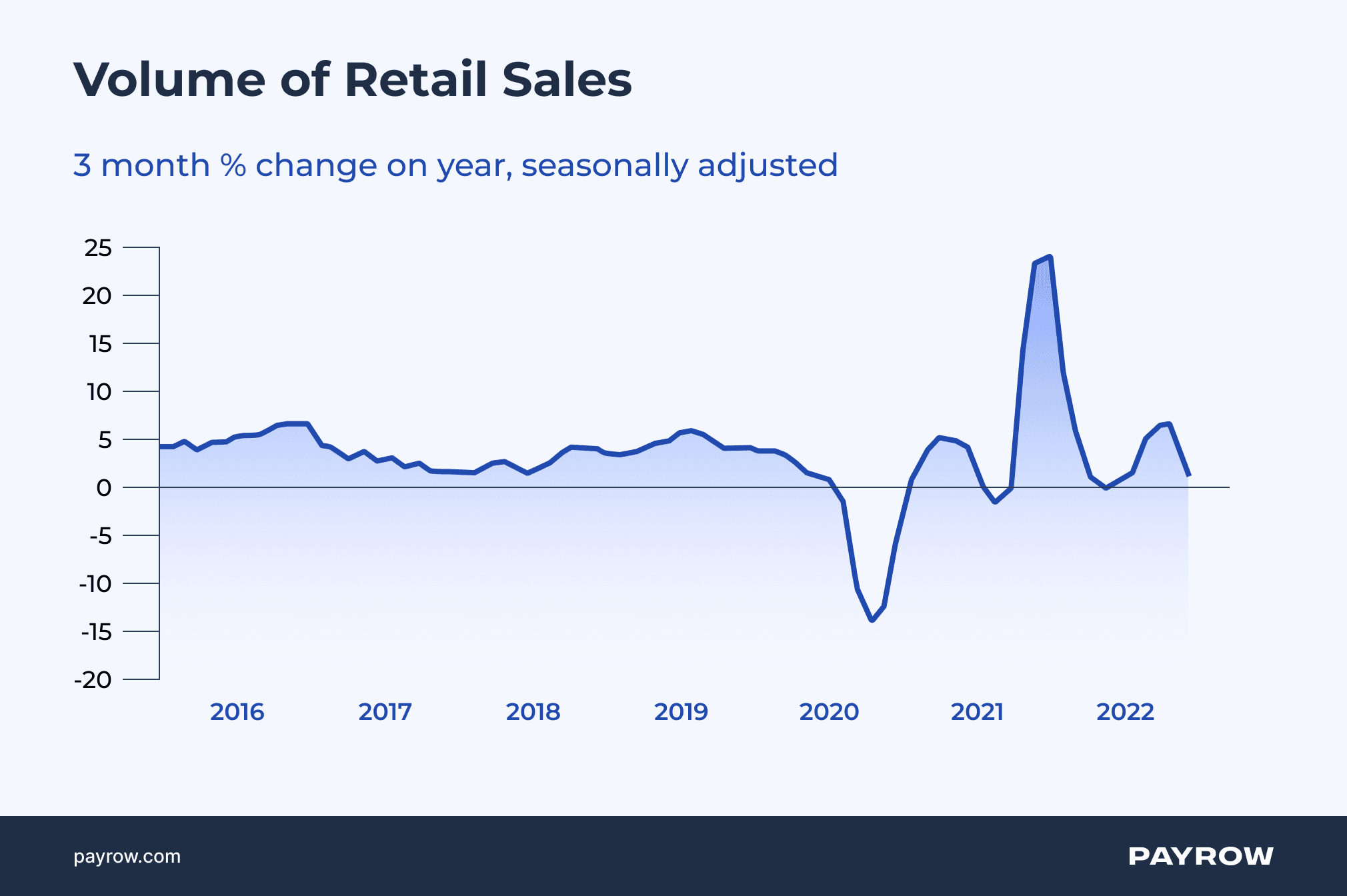 Fuel sales volumes fell 0.9% in July 2022 after falling 4.0% in June 2022. According to the Office of National Statistics, traffic in the UK was noticeably reduced in mid-July 2022. At the same time, there was a heat warning in some parts of the UK, which may have led to a decline in sales. 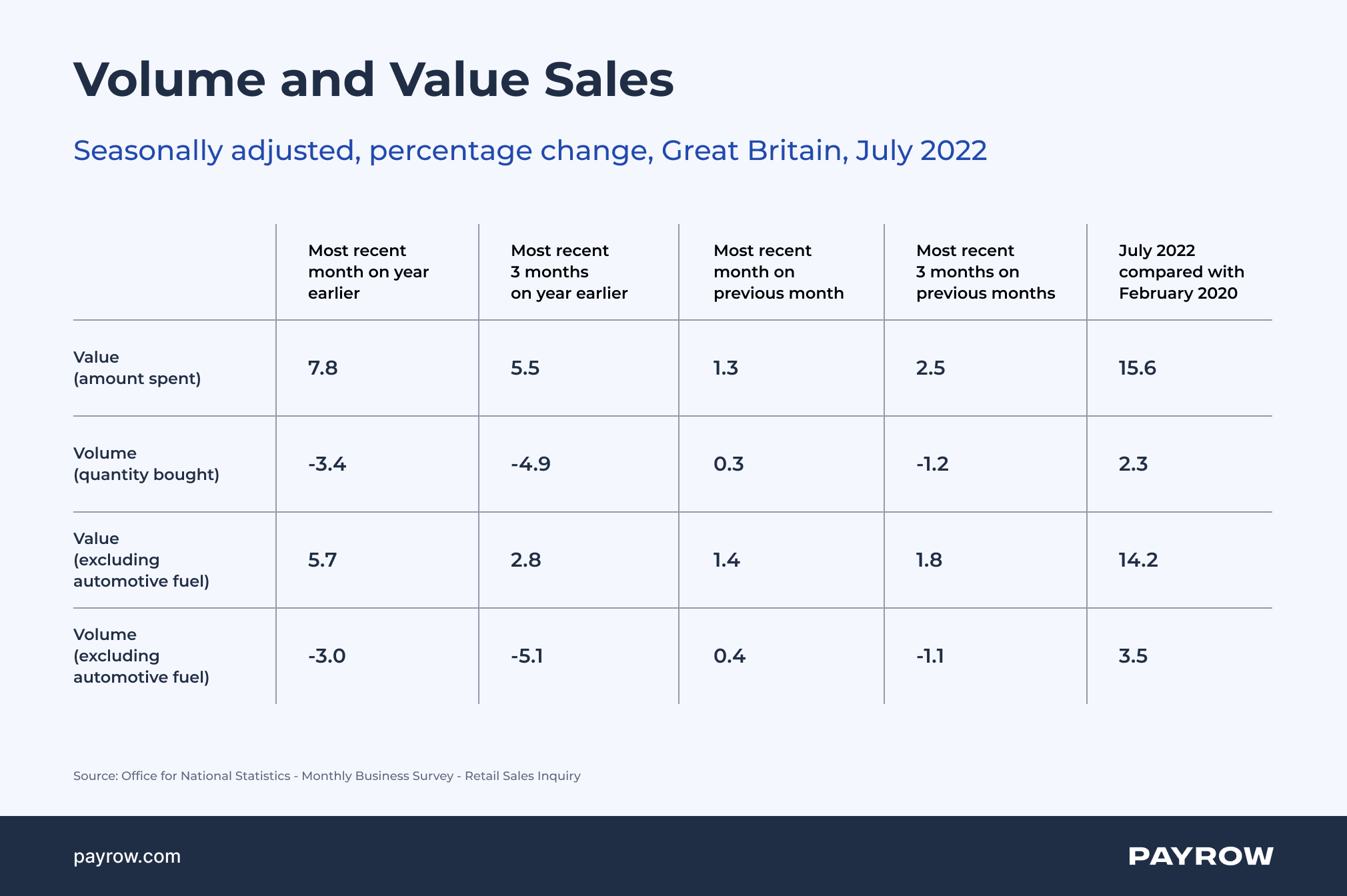 Grocery store sales increased by 0.1% in July compared to June, following a 2.7% rise between May and June. Retailers suggested this was largely a result of the Queen's Jubilee celebrations.

The average weekly value (total turnover) of internet sales in July 2022 amounted to £2.3 billion (excluding fuel). This accounted for 26% of all retail sales, which is slightly more than in May.

The factors influencing sales are divided into several categories, some depend on the seller; for example, the quality of the product, the market demand, and uniqueness.

There are also external factors that cannot be controlled, but the business can adjust to them, for example, by increasing production or replacing the components of the product.

The third category is factors that affect the buyer, for instance, high inflation, seasonal changes, holidays and sales, and so on. Let's look at a few reasons why we saw such sales results in the UK for the period June-July 2022.

The Queen's Jubilee celebrations in early June had only a temporary impact on sales. It was a relief from the negative pressure that has been very strong in recent months regarding retail spending. Gatherings and open-air parties during the long Jubilee weekend together with bank holidays contributed to an increase in food sales in June.

Economic changes have led to a redistribution of public spending. Unfortunately, this means that ordinary families make sacrifices regarding basic daily expenses. Petrol and diesel fuel prices soared to record highs in June and remained almost at the same high level in July. The consequences are that priorities in food spending have been shifted. According to a survey, in the first half of July, households bought less food due to a sharp rise in prices.

In an attempt to reduce the cost of living, consumers shop around for low prices, use promotions and discount coupons, and avoid spending on expensive restaurants and delivery services.

Each household is unique in its spending and income. Therefore, the rising cost of living does not have the same impact on all households. Wealthier families are better able to cover the growing costs thanks to their existing income and savings. They can support the demand for recreation, leisure, and entertainment in the summer of 2022. Thanks to the end of the pandemic, spending on airlines, travel agencies, hotels, tours, and rental housing for short periods continues to grow.

According to Retail Economics, when consumers want to spend money on non-essentials, more attention is paid to services. This led to a decrease in retail sales of non-food products in both June and July.

Can China Supply the World?

China's ability to supply consumer goods and raw materials was significantly affected by COVID-19, resulting in massive shortages. Unlike most countries that have decided to live with coronavirus, China adheres to a zero-spread covid policy. The policy is based on strict quarantine in several regions, forcing people to stay at home.

Over the past 30 years, China has been a huge driver of global economic growth. China’s industry has replaced the production that used to take place in the UK, USA, Germany, and other countries. Now many of these Chinese factories are not operating. Thus, in 2022 and 2023, China's economic growth will be insignificant, and the global shortage of goods and raw materials will remain.

Inflation in the System

In 2021, the central banks of countries around the world believed that the rise in inflation was caused by shortages. In their opinion, inflation should have decreased as soon as the world economy started moving again. However, inflationary pressure has many complex causes. The shortage of key components and consumer goods, the need for companies to incur higher transportation costs, and the obvious need for businesses to recover some of the losses incurred as a result of the pandemic have all led to higher prices.

Central banks started to raise interest rates, which have been artificially kept low since the 2008 financial crisis. The Bank Rate in May 2022 was 1.0%. The Bank of England increased the Bank Rate to 1.75% in August 2022. We can expect the rate to be 2.5% by mid-2023. Unfortunately, inaction in 2021 could lead to an overreaction in late 2022 and 2023, although 2.5% doesn't sound extremely bad. However, inflationary conditions are expected to persist until the end of 2022 and may not weaken until mid-2023.

Expectations also have a negative effect. The media talks about unstable fuel prices and 10% inflation. The regularly raised question is "how are you going to cope?" increases the caution of the population, reduces the consumption of certain types of goods and slows down economic activity. Some experts think that worries about historically stable and moderate inflation rates are exaggerated. After all, in the 1980s - when Margaret Thatcher was Prime Minister- the average RPI inflation was 7.5% per year.

Retail statistics in the UK in the summer of 2022 may not be the worst for 2022/23, as conditions will tighten. Closer to autumn, consumers will return from their summer holidays, and they will face the need to pay holiday bills on credit cards. We expect another wave of increases in energy prices and an increase in interest rates.

The cost of living is rising, so consumers will have to prioritise essentials, and spending on high-quality but expensive products may decrease. As margins remain questionable and costs continue to rise, a sharp drop in demand in autumn will have a negative impact on the retail sector. A true understanding of individual customer purchase patterns and the ability to differentiate them will become increasingly important for the sector.

Despite the difficult times for retail in the UK, Payrow helps retailers run their business by automating routine processes and saving on accounting services. Keep track of the changing economic situation and try to reduce costs thanks to automation with Payrow.