According to the data from the UK parliament, from 2021-2022, the UK government collected more than £915 billion in income from taxes and other sources.

When compared with the UK's GDP for the year, the amount received from revenues is equivalent to about 39% of the size of the economy. These figures are the highest since the 1980s.

Most of the revenue (more than £530 billion) comes from three main sources: 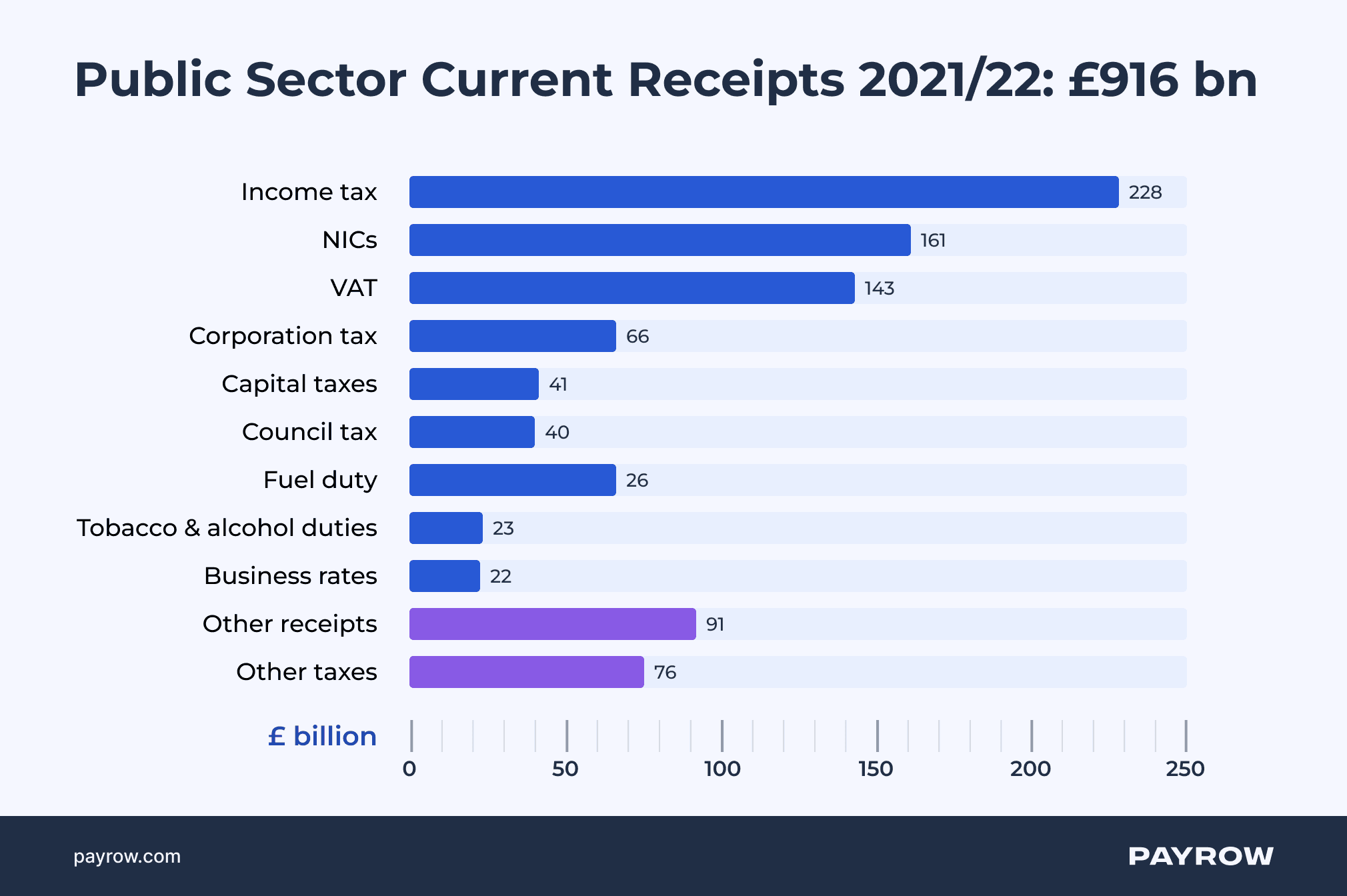 Since then, revenues have been increasing and have exceeded 36.5% of GDP every year since 2010/11. Among the cases recorded in history, such a level of annual receipts was a feature of the mid-1980s. According to forecasts, they will grow even more in the coming years.

Today, VAT and NICs are larger than in 1999-2000, compared to the size of the economy, while Corporate tax revenues were relatively smaller in the same period. After the pandemic, income tax receipts increased in comparison to 1999-2000.

Also, since the late 1990s, the growth of receipts from stamp duty on real estate transactions, capital gains tax, and council tax has significantly exceeded the growth of the economy. Duties on fuel and tobacco products have decreased. 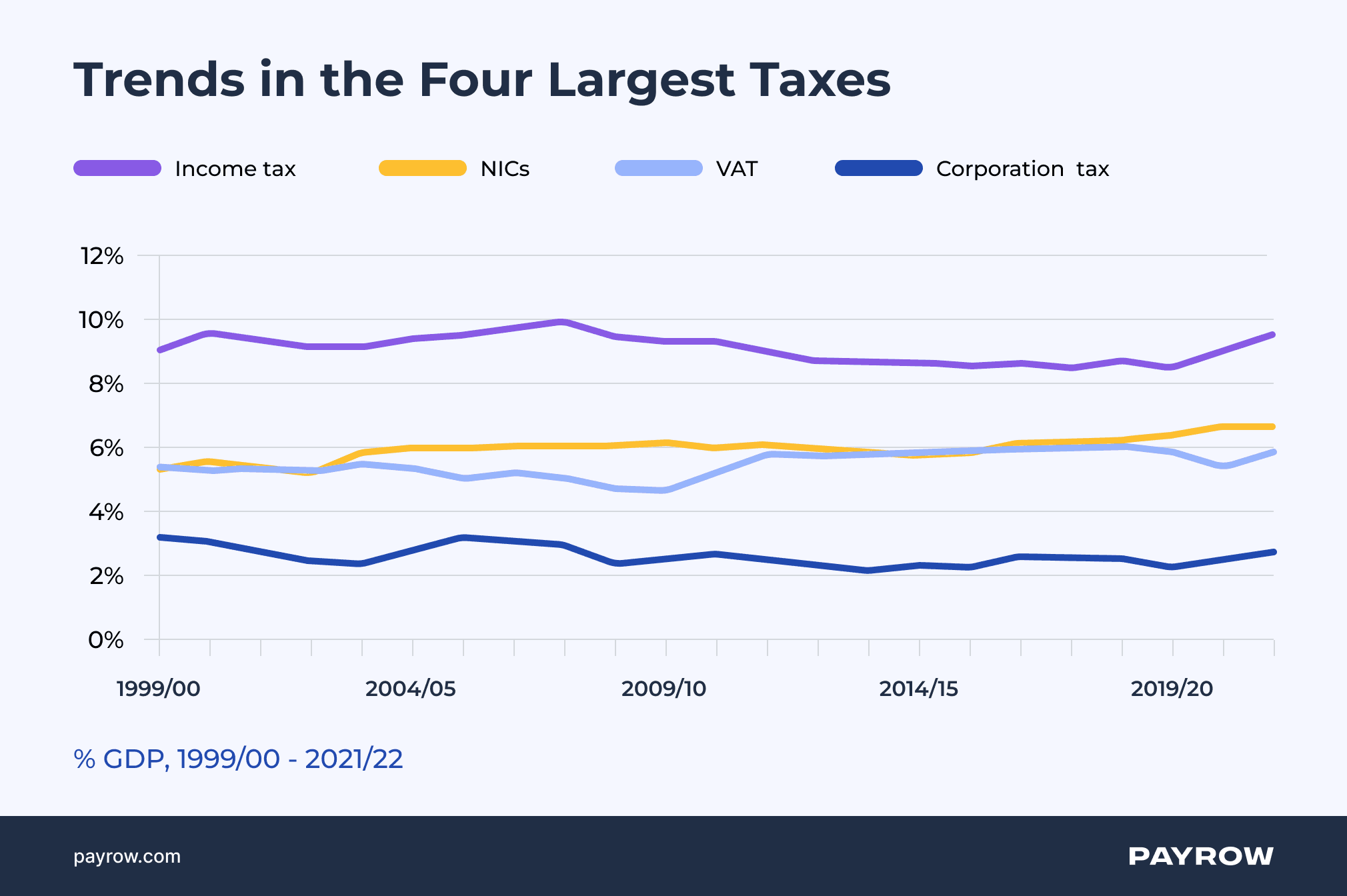 In 2020-21, receipts were particularly affected by the coronavirus pandemic. In total, they fell due to a decline in economic activity and due to the fact that the government provided tax breaks to support the economy. The governmental financial support included a tax holiday scheme to protect the incomes of households and grants for businesses, which also contributed to some tax revenues.

Since the UK economy was shrinking to a greater extent than receipts, receipts have become larger compared to their size. While the pandemic in 2021/22 affected individual taxes in different ways, total receipts increased and turned out to be more than predicted before the pandemic.

Households: The famous economic analytical centre, the Institute for Fiscal Studies (IFS), has calculated and published figures showing how much households pay taxes. The study affected approximately three-quarters of tax revenues, including NICS, VAT, income tax, council tax, and excise duties. The results showed that 50% of households with the highest incomes contribute nearly 80% of receipts.

The Сonnection of Taxes and Income Distribution 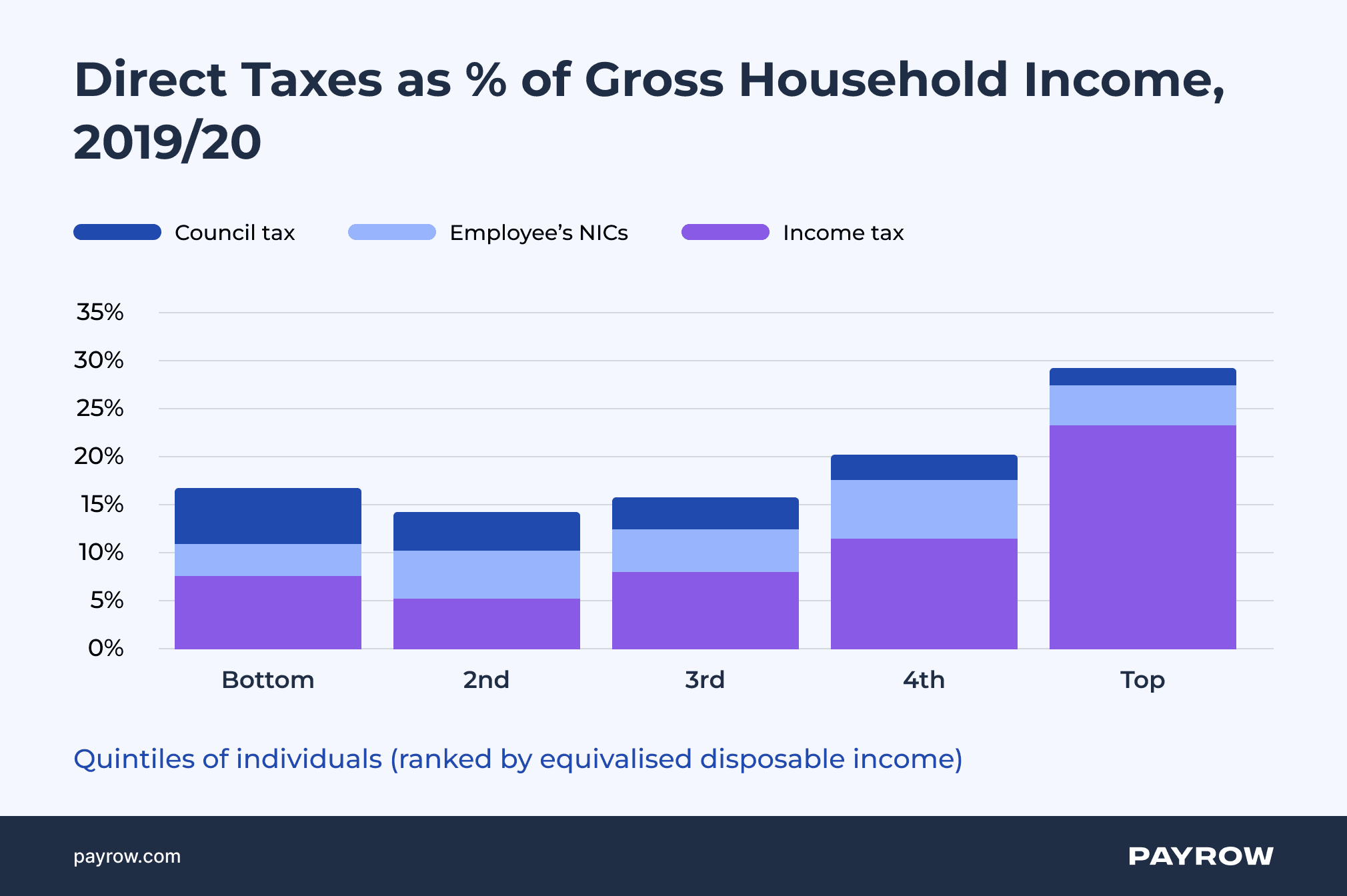 The number of fraud cases has dropped to a record low number. In 2020, there was a decrease in the volume of registered tax fraud, including tax refunds, duty evasion, and VAT fraud.

Here are some crucial points:

The income tax is 23% of the total state revenue.

It’s important to note that 43% of people do not pay income tax. But why? Some groups of the population do not pay income tax, first of all, this category includes the unemployed, stay-at-home parents, the homeless, and pensioners, as well as full-time carers. There are also people who earn less than the amount of personal allowance (which is £12,500). 43% of the UK population lives on less than £12,500 a year.

The country has reached such a high percentage of people who do not pay income tax for several reasons. Firstly, in recent years we have seen a trend of population ageing, that is, an increase in the number of retired people. Secondly, the state regularly increases the amount of personal allowance, which means that people who receive less than the newly established amount are exempt from paying income tax. However, this does not mean that such a large percentage does not make deductions to HMRC. The situation is more complicated than it seems to an inexperienced layman.

According to MailOnline, John O'Connell, executive director of the TaxPayers' Alliance, said that the reduction in the number of adults who pay income tax is due to an increase in the number of retirees and an increase in personal allowance. But people are also forced to pay other taxes, which many do not think about. The government takes a huge share of income through VAT, which is included in the cost of goods that consumers purchase. The population pays anyway, even if labour is no longer taxed.

He believes that eventually national insurance and income tax should be combined. This will simplify the system and provide people with greater awareness of how much HMRC is extracting from them.

The Payrow platform is your reliable assistant in business automation. We help startups, internet businesses, and companies process orders, create invoices, and manage payments. All Payrow services have a high level of security. Thanks to the optimization of financial flows, maintaining your accounting will become simple and comfortable. If you want to speed up the process of calculating and paying taxes - this service is just for you. If you have any questions, you can always contact the experts, as we provide all the necessary individual support at every stage of your business development.