The UK Government Is Changing Taxes: Let's Get This Straight

On September 23, the new UK government announced a large-scale program of investment incentives and tax cuts. The Chancellor revealed the growth plan aimed to unlock the potential of the British economy by combating high energy costs and inflation, as well as ensuring higher productivity and wages. On October 3, Kwasi Kwarteng cancelled the decision to reduce the maximum rate due to turbulence in the market and a sharp fall in the pound quotes.

Let's go through the list of governmental changes in more detail.

The measures stated in the new program include:

News Related to the Changes

The pound sterling reached a new 37-year low against the dollar on September 26. For the first time in several decades, the exchange rate dropped below $1.103. This happened just a few hours after the announcement of new governmental measures in the House of Commons. At the same time, investors ditched UK government bonds, and the FTSE 100 index fell to its lowest level since March. Boris Johnson, a member of the UK parliament, said that markets seem to be “spooked” by the scale of the “fiscal giveaway.” 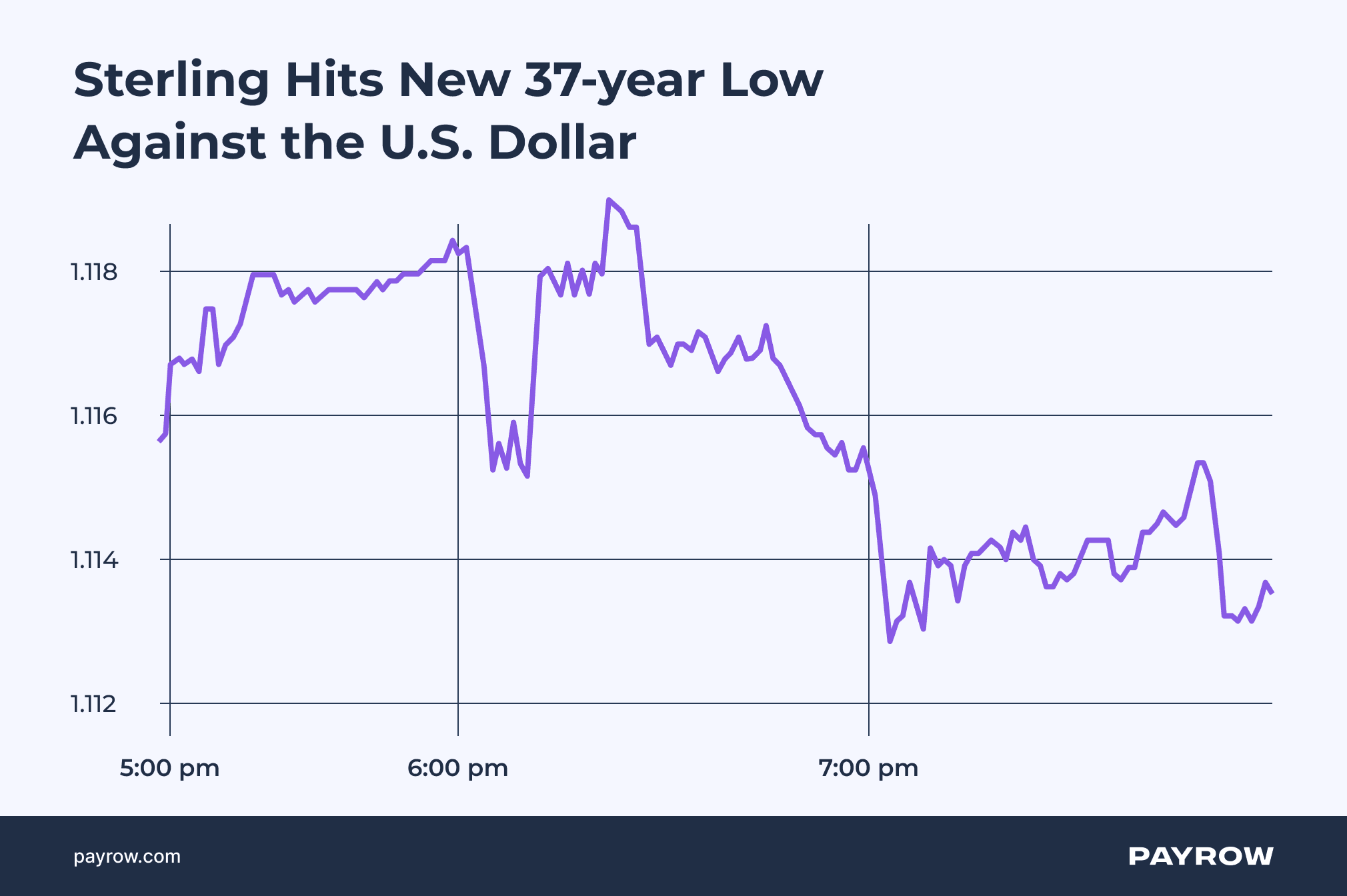 The Bank of England has said that the UK economy is likely to enter an official recession in the third quarter. The regulator has raised interest rates by 50 basis points to combat high inflation. The fall of the pound occurred the day after these events.

According to CNBC, the UK gross domestic product (GDP) shrank by 0.1% in the second quarter, while the whole economy is stagnating. This led to a severe reduction in real incomes. Inflation is forecast to peak above 13% in October.

Friday's package released by the government is not an official budget, even despite the extensive reforms. This discrepancy arose because the package was not accompanied by the usual economic forecasts of the Office for Budget Responsibility (OBR).

The members of the International Monetary Fund (IMF) made a rather rare statement, in which they criticised the UK’s new economic course. As the critics of the government change say, the combination of a reduction in the tax burden and a new plan to protect businesses and households from rising energy prices could potentially lead to an increase in UK government debt during a period of rising rates. The cost of the energy support package is supposed to be £100 billion ($111 billion) or more over two years.

In August 2022, the UK government borrowed £11.8 billion, which significantly exceeded forecasts and was £6.5 billion more than in the same month of 2019, due to increased government spending.

Kwarteng Announces an Increase in the Tax to 45p Top Rate

On October 3, British Chancellor Kwasi Kwarteng reversed the decision to reduce the maximum income tax rate after a negative reaction from Conservative MPs and instability in financial markets. Kwarteng tweeted on Monday, that it was obvious that the abolition of the 45p tax rate had become a distraction from our main mission to solve the problems, which faced our country.

He also added that the UK government does not object to the abolition of the 45p top tax rate.

The overall idea is that the move will allow the Conservatives “to focus on delivering the major parts of our growth package”.Speaking on BBC Breakfast on Monday, Kwarteng said “we felt the [response to the] 45p tax cut rate was drowning out a strong package on intervention on energy and we decided not to proceed with getting rid of it.”

The Chancellor's statement followed criticism from former cabinet ministers Michael Gove and Grant Shapps, as well as turbulence in the market after the government adopted a “mini" budget. The main UK budget will be released on November 23, 2022.

The pound rose sharply on Monday morning, driven by reports that the UK government plans to announce a U-turn. The pound sterling rose by 0.8% against the dollar, but by 7:30 GMT+1 fell to $1.12 immediately after the news was confirmed. 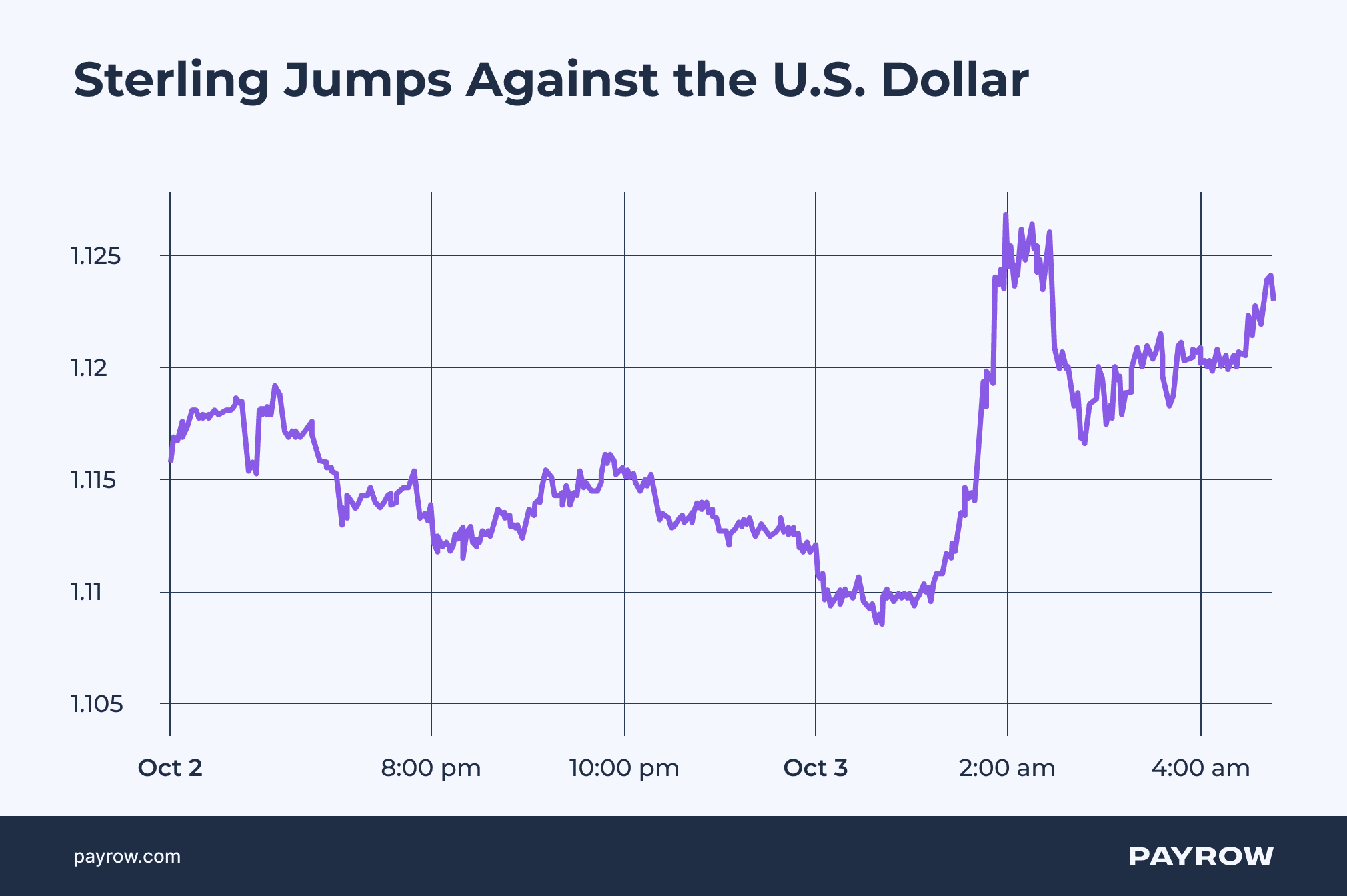 Last week the Bank of England interfered in the UK bond market, suspending the start of the sale of gilts (UK government bonds) and buying bonds for the long-term. To explain this, let’s mention that the yield on ten-year government bonds – the interest rate paid on bonds, which moves inversely to prices – grew at a record pace in September. Yields on two-year and 30-year bonds rose at the highest pace since 1994.

In such a difficult time of turbulence and decline in the UK economy, businesses need to remain transparent and have all reports in order. Clear and on-time payment of taxes, accounting for changes in legislation, routine work - all this adds to the tasks of the owners of companies. However, there are ways to make this time easier.

If you want to automate your business, the Payrow platform can become your reliable assistant. For many years we have been successfully helping startups, online companies, and small and medium-sized businesses to process orders, manage payments and seamlessly create invoices.

We are proud of the high level of security of our services. You will be able to easily and comfortably maintain accounting thanks to the optimization of financial flows. If you want to speed up and simplify the process of calculating and paying taxes – this service is just for you.

Payrow takes care of its customers and tries to provide 24/7 support and advice on the first request of a user of our platform. Therefore, if you have any questions, you can always contact experts and get individual support at any stage of business development.